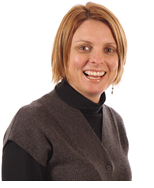 Janine is the first female Optometrist to join the Sumba Eye Program and will be an integral part of the  team on their next visit in May .

Her other passions include swimming, cycling and triathlons with her three children

Janine travels this May on a week-long journey that will involve lecturing, eye clinics and instruction on ophthalmoscopy and slit-lamp training to local nurses and teams.

“I like this program. Instead of just testing eyes, the aim is for locals to become self-sufficient,” says Janine. “It’s a very sustainable model.”

The Sumba Eye Program, established by Australia’s Dr Mark Ellis in 2007, has goals of building local and regional health teams to care for the population of Nusa Tenggara Timur and has achieved nearly 5,000 consultations, 600 surgeries to restore sight, and the dispensing of nearly 3,500 pairs of glasses.

Although she is looking forward to the opportunity, Janine has her eyes wide open to what she’ll find. “It’s poor,” she says. “Some of the situations will be very sad.”

Janine is honoured to be asked as the first Australian female Optometrist to join the program, enabling her to share her skills that she has developed in Young and is hoping to be involved on an ongoing basis.